This podcast was a very special conversation I had via Skype with Rich Roll. I tweeted him a before and after pic just quickly saying how much he had inspired me to become my own version of an athlete. He emailed me about potentially being on the podcast, and of course I agreed to do the interview. I also sent him what he calls my “manifesto,” titled FREE JOSH LAJAUNIE, which wound up being the very first blog post on this site. This interview is where my next phase as a freed Josh LaJaunie began.

Not long after that, a friend of mine began a podcast called The Christian Villere Show. He is a funny young man, an aspiring comedian, and I was pumped that he asked me to be a guest on his podcast. He has since moved on to other things, but the interview was fun and it helped me with being more comfortable with fielding questions about my journey.

Then, while at an event called Healthfest in Marshall, TX, I met a guy named B.J. Tucker on a morning group run. After the run, he told me he had a podcast and that he’d love to have me on as a guest. I agreed to do the podcast with him and his lovely co-host, Lisa Fallon Midel, and was I glad I did! We had a great conversation.

Also, while at HealthFest Marshall I had the opportunity to meet Rich Roll in person! Of course I gave him a big hug as soon as he got close enough. While in Marshall he wanted to finally do an in-person interview with me for the #RRP . So, we met at his hotel room, and this took place. 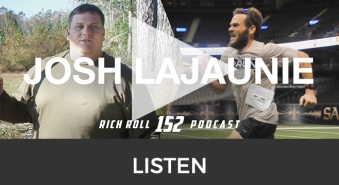 Before Rich actually published the podcast, the organizers of HealthFest contacted me and asked me to come back up to Marshall to speak at a potluck. I was honored to not only speak to the plant-based potluck group, but to firemen and police officers of Marshall, TX that day. The following is footage of the talk I gave after we ate that night.

At the Get Healthy Marshall potluck talk, I met Dr. Rita Louise. She asked me to interview me on her Just Energy Radio Show. The following link is to that interview.

Not long after the Just Energy Radio interview  a really cool guy in Germany contacted for an interview on his FatBoysRun podcast. In this conversation, we talked a lot about how the Saints and Coach Payton influenced my willing/desire to change what had always been. Fun convo with a fun guy!

This was a fun conversation with podcast host who interviews us middle-of-the-pack guys exclusively. Fun convo! 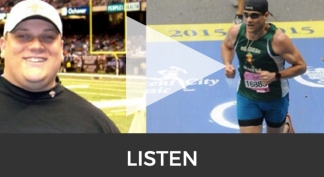 Watch me tell my story at Plant-Stock 2017

THAT’S IT FOR NOW…STAYED TUNED. HAHA.